At some point in automotive history – maybe years ago, maybe right now – technology became more important than horsepower and performance. That notion might be best represented by the 2021 Mercedes-Benz S-Class, the new luxury juggernaut coming to our shores in the first half of next year. With every briefing, round table and presentation so far, we have heard about the new car’s new-generation MBUX telematics, all-new augmented reality Head-Up Display, all-new 1750-watt, 30-speaker, eight-resonator Burmester 4D Surround Sound System and the Enhanced ENERGIZING Comfort health and wellness system. But no one seems to have talked much about things we used to pay attention to. It was over an hour into the most recent walkaround-sit-in presentation of the S-Class that I finally asked, “Does this thing have an engine?”

Both S 500 and S 580 will get the 4MATIC awd system at launch. Other drivetrain possibilities come later. The two launch engines are mated to nine-speed 9 G-Tronic transmissions. Both will be electronically limited to 130 mph.

Airmatic air bag suspensions carry the loads, the loads being not yet announced, as curb weight, price and 0-60 figures will come closer to the car’s launch next year.

There, that’s for you old-school traditionalist car magazine readers, however many of you there are left. The rest of the world, apparently, wants to know how many devices this thing will handle and how many teraflops of data you can route through it before it blows to smithereens. Answer: A lot. So many, in fact, that we can’t possibly list them all here, we’d run out of electrons. Autoweek’s Jake Lingeman already filled you in on the Five Screens in the S-Class and what they’ll do:

More on that in a minute. Then, a little over a month ago Autoweek’s Jay Ramey listed five features of the new S Class:

That’s what you already knew if you’d read Lingeman’s and Ramey’s news items. Now for some more new stuff.

First off, that’s a whole new design you’re looking at, or rather, “…a seamless combination of luxurious form and intelligent function,” according to Adam Chamberlain, VP Sales and product management from Mercedes Benz USA.

The new S-Class is bigger in every dimension than its predecessor, it’s an inch longer, two inches wider and a half an inch taller. But the design tries to make it look the same. For instance, even though it’s 0.4” taller, the higher “catwalk” of the line running down the top of the side actually makes the car appear smaller, according to Eugen Enns, Senior Exterior Design Manager at MB’s International Design Center in Carlsbad, CA.

“You read the entire greenhouse from the capture to this catwalk, so it actually looks smaller than it really is,” said Enns, at a vehicle walkaround in Mercedes R&D facility in L.A.

The side is so wide and smooth that it looks a little slabby at first, but you get used to it. The flush door handles add to that. I got a demo of the door handles in action. With the key fob in your pocket the handles extend out electrically, or you can touch them to get them to “present.” They also present if the system determines you’ve been in an accident.

The front end gets a more pronounced, upright grille that also houses the radar for the cruise control.

“We changed the aspect ratio of the grill, it’s subtle because something like an S Class, you don’t want to go crazy with that,” said Enns. “It’s the crown of the next decade of the ‘20s to come.”

The taillights get a sort of boomerang triangular look. But the whole thing is fairly understated, both outside and in. Enns pointed out how the wide, flat hood flows seamlessly into the dash, like a single, barely bent plane. In the center of that dash is the new 12.8-inch OLED touchscreen that “waterfalls” into the center armrest console, leading to the rear armest console, which itself waterfalls up the rear (at least in the four-seater, which we won’t get). There are also supposed to be small waterfalls on the doors. That OLED screen, by the way, eliminates 27 buttons on today’s S-Class.

On that 12.8-inch screen, this car gets the second-generation Mercedes MBUX, or Mercedes-Benz User Experience, “…a revolutionary multimedia system featuring innovative technology based on Artificial Intelligence and an intuitive operating system.” Last time I tried something like this was in the GLS SUV. It kept interpreting words I or my co-pilot said as being “Hey Mercedes” and asking us what we wanted. I finally turned that one off, after swearing at it for a while. This MBUX is much better than that, they say, with a new-generation voice control that speaks 27 languages, a veritable United Nations of words. This system has learning capability as well as intelligent voice control with natural language understanding.

You can identify yourself to the system by fingerprint recognition, voice recognition, facial recognition or by entering your PIN number. Once in, you can exploit the MBUX’ 50-percent increase in computing power. The memory bandwidth is now 41,790 MB/s, which is faster than I’m typing these words, believe it or not.

MBUX can be used on up to five screens throughout the interior. Rear-seat passengers get to control their own destinies through MBUX, too, even changing or adding to route guidance. Of course, if your rear-seat passengers are little kids, you can lock that feature out. Screen content can also be shared within the car. For music, Mercedes has integrated Spotify and TuneIn internet radio, while subscriptions to TIDAL and Amazon Music are available as well. And yes, you can easily integrate the music from your smart phone to the system.

The new Burmester 4D Surround Sound System can be tuned to your exact specifications. I got to adjust various parts of the sound spectrum to thumping base or tinny treble. Sound actuators in the seats add to the experience.

In the driver’s seat, both the instrument cluster and the head-up display offer 3D imagery, which looks kind of cool and will probably help you get where you’re going quicker and more safely. That extends to navigation and a new, unique 3D set of views of the car when you’re parking that allow you to watch from just about any angle. The system also constantly monitors the driver to see if he or she is tired, distracted or any number of adverse conditions, and the enhanced Energizing Comfort health and wellness system takes action based on that. For instance, I convinced it that I was tired and it said, I’m not making this up, “You should go plug yourself in.” Was that an electronic insult? No, that was Health and Wellness! It gave me a ten-minute spa treatment that included massage and various colored lights and sounds to get me focused on driving once again (even though I wasn’t driving). Thanks, Mercedes!

What else? There’s so much going on in this car. The seats are climate-controlled with six radial fans to cool off or with neck warmers to heat up. There are 250 LED lights in this rig that can display 64 colors. There are six USB-C ports and one 115-volt outlet. There’s a two-piece panorama sunroof.

There are many, many Driver Assistance Systems that have the word “Assist” in the name: Active Distance Assist DISTRONIC adaptive cruise control that can also reduce speed for upcoming corners; Active Stop and Go Assist keeps the vehicle within the lane and away from other cars at up to 35 mph; Active Steering Assist steers the car as long as you have your hands on the wheel; Active Parking Assist parallel parks for you; there are many others but my fingers hurt.

There are going to be three trim levels: Luxury Line, AMG Line and Executive Line, with features appropriate to each. The AMG Line is not the same as an AMG, it doesn’t have any performance-enhancing features, just body styling, floormats and wheels. Since this is your money we’re spending here, I recommend the Executive Line, since you get the MBUX Rear Seat Entertainment and the ten-degree rear steering.

There will be two models at launch: the S 500 4MATIC sedan and S 580 4MATIC sedan. From there you can add any of the above packages. We in the U.S. will get the rear bench seat when the car launches here in the first half of 2021. I sat in a four-seat S-Class with a meaty rear center armrest that we won’t see for a while. Pricing hasn’t been released or even fully determined yet. Also, look for a first drive from us some time before launch. It’s a big deal when a new S-Class comes out. Just ask Mercedes:

“For our brand, the launch of a new S-Class represents an important milestone in our continued evolution, a car that embodies our very best thinking, Human Centered innovations supported by 135 years of automotive expertise, a great leap forward not only for our company, but for the industry as a whole,” said Chamberlain, the VP of Sales and product management. “Just consider the now-ubiquitous innovations such as four-wheel abs, electronic stability control, and semi-autonomous safety systems. They all made their debuts on an S-Class first. So the arrival of a new S-Class is always a very big deal. And in keeping with that tradition, we’re quite confident that the next generation has not only raised the bar, but is poised to reinvent the automobile once again.”

Fuel Economy (EPA City/Highway/Combined): TBA
Pros: The perfect high-tech high-speed autobahn dreadnought
Cons: It’ll take you a while to master all that technology

Fri Sep 11 , 2020
Tesla considers itself the electric car technology leader, but there’s a new competitor emerging to vie for that title. The company is Lucid Motors, a start-up in Newark, Calif., near Silicon Valley. The car is the Lucid Air, an ultra-luxury ride with advanced battery technology that sets itself apart with […] 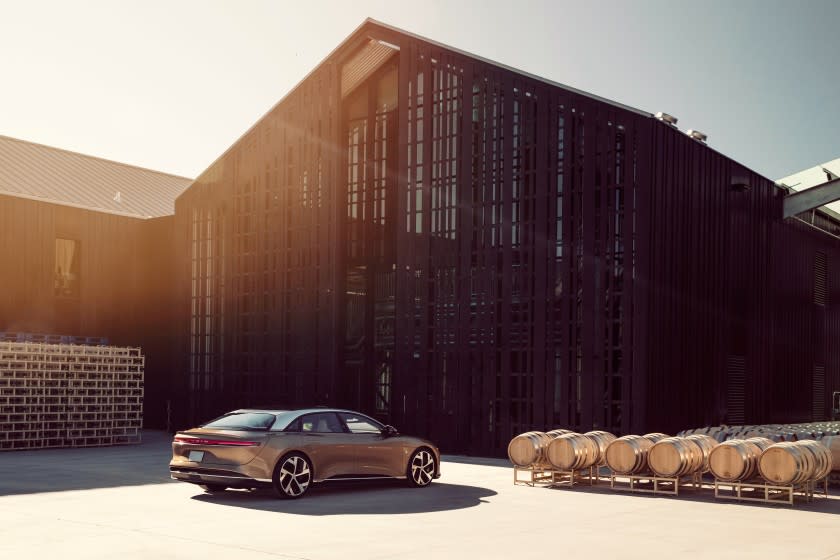