The Genesis G70 Shooting Brake’s suave looks are drop-dead gorgeous – but is it too much style over substance?

In a world where SUVs sell better than all other body styles, it’s a wonder to think that some manufacturers are penning new wagon designs. When South Korean luxury carmaker Genesis dropped the 2022 Genesis G70 Shooting Brake design, we all threw an approving thumbs-up in admiration.

In terms of purely design, it’s drop-dead gorgeous. We often go on about looks being a subjective part of automotive appraisal – but the G70 Shooting Brake is stunning as a rule.

However, it didn’t take long after reading the press release for the experience to sour somewhat. This small and sporty Shooting Brake design wouldn’t come with the high-output 274kW/510Nm 3.3-litre twin-turbo V6 of its sedan counterpart – it would get the 179kW/353Nm 2.0-litre turbocharged unit only.

It seemed like a miss that Genesis would put such a humdrum engine into its most interesting-looking car, but here we are.

Where the G70 SB does claw back some points is its long list of equipment. Included in the base price you’ll receive a 10.25-inch touchscreen, a 12.3-inch 3D instrument cluster, 19-inch alloy wheels, Brembo performance brakes, a limited-slip differential (both typically part of the Sport Line package on other G70 models), adaptive LED headlights, and a panoramic sunroof.

It’s a strong suite of kit that aims to impress on the spec sheet, but what we’re concerned about is the overall experience and whether it can stand up to the established luxurious competition.

On pure looks evaluation, the G70 Shooting Brake impresses on first entry. There is quilted nappa leather upholstery to ogle over and every surface feels covered in premium materials.

The silver trim on the centre console looks straight out of a Bentley, while the suede headlining is ultra luxurious for its segment. There is also cool tech to impress, such as the 3D-effect digital instrument cluster that houses a lane-change camera view.

In practice, it’s a luxurious cabin to sit in with great side support and a comfy cushion. A very low seating position adds to the car’s sporty nature, but does impact vision out of the car. In particular, the vision out the back of the car is letterboxed due to the sloping roof.

It does feel like it borrows from the Hyundai parts bin too much. If you’re playing in the high-end, it’s important to bring fresh new parts, not to use door handles, buttons, and infotainment systems from lower-specified cars in the Hyundai family.

Get a great deal today

Interested in this car? Provide your details and we’ll connect you to a member of the Drive team.

Particularly egregious is the door handle sound that feels tinny and cheap. Genesis does a much better job with the GV80 and GV70 SUVs – we’d love the same approach applied to the G70.

There was also a creaking coming from the sunroof on our test car – not the experience you expect from its price point.

Front-row space cocoons around the driver and there’s good space to get acquainted with. Storage space is decent, with a sizeable tray below the central dash and two cupholders in the console.

Space elsewhere is lacking. More so than the sloping roof line impacting headroom, space in the second row is limited for legs and feet.

You can barely slip your feet between the seat squab of the rear row and the seat back in front, making for a very uncomfortable experience. It’s a space that belies its spacious wagon body style and ends up feeling like a cramped coupe in the back.

Things are even worse when you open the electric tailgate to access the boot. There’s a claimed 465L of space back there, but the room is cramped and difficult to use. The opening has a high load lip that makes it hard to slide items in, while the Genesis roadside assistance packs are tacked awkwardly to the sides.

The Genesis G70 makes use of a 10.25-inch touchscreen equipped with digital radio and satellite navigation. It presents as a nice and simple system to use with blocky icons to select to change menus, while button shortcuts are found below the display. Wired Apple CarPlay and Android Auto smartphone mirroring are available for those keen on using a more familiar system.

I’d expect a few more bespoke touches to the Genesis system if it’s really trying to carve out a luxury niche – it does use a lot of the Hyundai system’s looks. Graphics have been given a light restyle, but not much more.

Audio is covered off by the 15-speaker Lexicon system that sounds great no matter which seat you’re in. The Genesis borrows Hyundai’s Sounds of Nature gimmick that pipes authentic nature sounds through the speakers, in case you get bored of music and radio.

A 12.3-inch digital instrument cluster is found in front of the driver but, the 3D effect gives it a pixelated, low resolution appearance. It shows a pop-up video feed from alongside when you change lanes, a handy addition to the more traditional blind-spot monitoring.

The Genesis G70 was originally crash-tested by ANCAP in 2018 and received a five-star rating. The updated model – and Shooting Brake variant – inherit this score.

This is achieved through a full suite of safety technology including adaptive cruise control, lane-following assist and 10 airbags. Active safety tech is covered off with items such as lane-keep assist, lane-follow assist, blind-spot monitoring, rear cross-traffic alert, 360-degree camera, and safe exit warning.

As we know, wagons are a rare breed. The G70 Shooting Brake competes with few alternatives, save for the aforementioned A4 Avant and 3 Series Touring. In that sense, its $79,000 price point seems fair for what you get in terms of style and equipment.

However, compare the G70 to its own range and it becomes a pricey option. The wagon alternative is $16,000 more expensive than its sedan counterpart, which makes it difficult to justify – especially considering the minimal add in practicality.

To offset that disparity, the Shooting Brake does add in features from the Luxury Line and Sport Line packages that are optional on the sedan.

In any case, Genesis warrants the G70 over a five-year/unlimited-kilometre period. It gets five years’ worth of free servicing thrown in, which is a nice little value-add buyers can look forward to.

More than the car, too, Genesis offers a luxurious brand experience that extends far beyond the initial purchase. Initiatives such as a concierge service, complimentary servicing, and an architecturally designed brand studio make for a high-end buying experience befitting of a prestige car manufacturer.

Where buyers will pay extra over its rivals is fuel cost. Although Genesis claims 9.1L/100km on a combined cycle, our testing resulted in a 12.0L/100km reading, which is very ordinary for its segment.

Powering the Genesis G70 Shooting Brake is a singular engine option, and unfortunately it’s the entry-level engine of the G70 range. The 2.0-litre turbocharged four-cylinder motor stocks outputs totalling 179kW/353Nm. This power is sent to the rear wheels through an eight-speed automatic transmission.

Those outputs sound like they’d be enough on paper, but ultimately don’t feel that exciting when you’re behind the wheel. It’s definitely underpowered compared to the G70’s sporting looks. The G70 Shooting Brake may put the ‘sport’ in sportwagon visually, but it is crying out for an engine to match.

It also sounds like a hairdryer and isn’t the last word in refinement. In fact, there’s a fair bit of road noise that permeates through the cabin.

Happily, the G70 rides like a luxury car should, and the low-slung driving position is comfortable and holds the driver nicely in place. The quick steering rack is wonderfully tight and connected, and should make owners happy about their purchase should they find themselves on a twisty back road.

Though the rear window is, at times, difficult to see through, the G70 can be easily manoeuvred into parking spaces and around town with its light steering and neat camera system.

For a first-timer in the segment, the G70 makes a nice and alternative entry against some high-flying German alternatives. However, it’s not a first-timer – the G70 has been around for a few years, and even through a midlife facelift that could have ironed out issues such as its parts-sharing and cramped space.

It does impress in regards to equipment and on its presentation, and its genuinely premium experience after you buy the car considering the after-sales care. But other areas such as the meek engine and quality issues loom over its lofty price point.

We can’t wait to see this car in its proper next generation, which should sort out many of its misgivings, because we really do love a wagon.

Tom started out in the automotive industry by exploiting his photographic skills but quickly learned that journalists got the better end of the deal. He began with CarAdvice in 2014, left in 2017 to join Bauer Media titles including Wheels and WhichCar and subsequently returned to CarAdvice in early 2021 during its transition to Drive.

He understands that every car buyer is unique and has varying requirements when it comes to buying a new car, but equally, there’s also a loyal subset of Drive audience that loves entertaining enthusiast content.

Tom holds a deep respect for all things automotive no matter the model, priding himself on noticing the subtle things that make each car tick. Not a day goes by that he doesn’t learn something new in an everchanging industry, which is then imparted to the Drive reader base.

Sat Apr 23 , 2022
RideShift, the e-commerce manufacturer driven by Cash Automotive Team, delivers buyers in the Carolinas and nation-broad a completely automated, store-to-invest in-to-delivery working experience in a make any difference of minutes. RideShift supplies clients with the visibility to see pre-qualified payments on thousands of pre-owned cars in stock, and look at […] 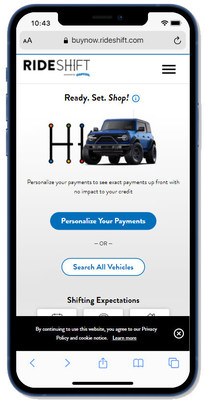