He drove it like he stole it, only he owned these cars.

One of the most famous musicians in the world, Keith Richards of the Rolling Stones is your prototypical fast-and-hard-living rock star. He’s been imitated by many, but the man has lived such a crazy life he makes it difficult to copy completely. What you might not know about him is the sordid past of his automotive enthusiasm. We wouldn’t necessarily call Richards a gearhead per se, but the man had a lot of money he liked to spend on expensive cars. Even more interesting are the stories around what he did with these vehicles, with the most interesting tales detailed below.

There are many stories of how Keith Richards drove instead of flying whenever possible. Considering the rather compact geography of Western Europe, he was able to take whatever car he preferred to go from gig to gig, rather than hopping in an airplane like the rest of the entourage.

One of Richard’s preferred rides for traveling the concert circuit was his 1972 Ferrari Dino 246 GT. He purchased it new, racking up about 25,000 miles before selling it in 1986.

That car went into a well-regarded private collection in Japan, until it was sold in 2014 to another British musician, Liam Howlett, co-founder of The Prodigy. After rebuilding the engine, Howlett savvily flipped the car, the next owner in turn selling it at auction in 2018 for $549,614.

Keith Richards famously crashed his 1965 Bentley S3 Continental Flying Spur back in 1976 when he fell asleep at the wheel and hit a tree. There were seven passengers in the car at the time, including Richard’s seven year-old son. Thankfully, nobody was killed, but the rocker was arrested by the police when they found acid in his jacket pocket.

As told in his autobiography Life when recalling the incident, Richards commented, “At least we didn’t hit anybody.” Yes, indeed. In that same interview, he insisted he’s a good driver, which is of course evident.

Showing just how tough Bentleys are, the luxury car was repaired and auctioned through Bonhams in September of 2015 for $947,285. The fact it was owned by a celebrity and was in a famous accident obviously helped fuel the bidding process.

The Bentley is a beautiful car and anyone who’s into luxurious classics could easily understand why Richards or anyone else would be attracted to it. The rock star had “Blue Lena” as he called it modified so there was a secret compartment in the frame. You can guess what he stashed in that hideaway so the cops wouldn’t find it.

That crash in 1976 wasn’t the only questionable incident in which Blue Lena had been an unwitting participant. For example, the car was damaged in a “near-riot situation” outside a nightclub in Barcelona once, the windshield being cracked. Multiple priests also had to exorcise several demons out of the backseat (we can’t confirm that happened, but it sure is believable). Richards sold the car in 1978.

Thrown Clear Of The Wreck

You might say Keith Richards is like a cat with nine lives, or maybe 90 of them. You could also argue the rock star didn’t learn from past lessons of reckless driving and other poor life choices.

Back in 1969, before the Bentley crash, Richards and his pregnant girlfriend Anita Pallenberg were reportedly pushing well past the speed limit while tooling around the country roads in Sussex County, UK behind the wheel of a 1947 Mercedes-Benz convertible (it’s not entirely clear what model, since the German brand made more than one and no sources seem to care about the specifics like we do).

Yet again, we get a recounting of the crash from Richard’s autobiography, Life. While traveling at 70 mph, the rocker said a red light turned on in the dash and “nothing would work.” With the brakes and steering both out, the convertible careened out of control, rolling over before coming to a rest.

Richards was thrown clear of the crash. Miraculously, the man wasn’t injured at all. His girlfriend, who was seven months along in her pregnancy, sustained a broken collarbone but nothing more. During the crash, the rocker said he has his first of many out-of-body experiences, watching himself get thrown like a rag doll while his girlfriend was still in the somersaulting Mercedes.

This time around Richards was able to escape prosecution for driving while intoxicated thanks to an associate who hid the drug stash they had in the branches of a nearby tree. After all, what are true friends for?

Interestingly enough, the Mercedes prevented Pallenberg from being more seriously injured because it was literally built like a tank. Constructed in 1947 after the close of WWII, the German automaker used parts of the Panzer tanks, including the armored steel body panels, to make cars. Talk about dumb luck.

Despite Keith Richard’s notorious reputation, the Rolling Stones guitarist hasn’t trashed every car in his possession. Case in point is the 1983 Ferrari400i he owned since new and kept for 35 years. It was never crashed and in fact looked pretty amazing in 2017 when it crossed the auction block via RM Sotheby’s. Perhaps that’s why it netted 345,000 euros.

Alan Dunn, the tour manager for the Rolling Stones, took delivery of the car in 1983. It was used at first to transport Richards from his home to the recording studio while cutting the album Dirty Work in Paris. When the rocker moved back to the UK he had the car transported there, so he must’ve enjoyed it well enough. In fact, before it was auctioned, he reportedly gushed about how much he loved the car.

Not everyone is a fan of the Ferrari 400i. After all, it doesn’t have the sleek, exotic lines some absolutely demand from Maranello. It actually appears more like a normal car, thanks to its GT sensibilities, channeling the Honda Accord and several other pedestrian rides from back then pretty fiercely. However, the 4.8-liter V12 made it move and sound nothing like those other vehicles. Richards even special ordered a five-speed automatic transmission, instead of the five-speed manual or three-speed automatic which were standard from the factory. We have to question Richard’s taste here, but the man knew what he wanted.

What’s really surprising about this Ferrari is the fact it had only 2,253 miles on the odometer when it was auctioned. For over three decades it was used sparingly and preserved meticulously. If only Richards had done the same thing with his body, things would be quite different now.

Wed Jul 1 , 2020
Some consumers may celebrate the birth of the nation by buying a new car, as Fourth of July car deals and pandemic concerns provide an incentive to shop. Automotive marketplace Cars.com surveyed consumers who have an interest in acquiring a new car to see if the COVID-19 outbreak was impacting […] 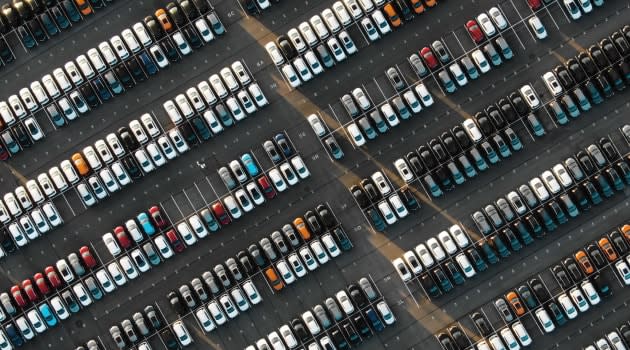