After months of teasers, Cadillac finally revealed its Lyriq show car to the world last night. A concept meant to preview the production version, it’s our best look yet at what the luxury carmaker’s electric future will look like.

Though this Lyriq is technically a concept, it should be a good representation of what we’ll actually see in show rooms in a couple of years. The sleek crossover shape is headed by a new “black crystal” grille design packed with LED lighting, paired with massive chrome wheels as well as a blacked-out roofline, side skirts, and fender edges. A single sweeping 33-inch LED screen dominates the interior, displaying driver info, camera views, as well as infotainment controls. According to Cadillac, the display “has the highest pixel density available in the automotive industry today.”

More important than the Lyriq’s looks, though, is what hides underneath. The Lyriq show car, as well as the production version, is based on GM’s next-gen modular EV architecture, which uses the company’s Ultium drivetrain. The 100 kWh floor-mounted battery pack will allow an available range of over 300 miles, according to Cadillac. The company even promises a near 50:50 weight distribution. The production Lyriq will be rear-wheel drive as standard, with “performance all-wheel drive” available as an option. No performance specs have been disclosed, but we’re betting this thing is quick.

Cadillac promises the Lyriq will be packed to the brim with the latest tech, including advanced battery monitoring systems, the latest version of the company’s Super Cruise assisted driving system, remote parking, and a “dual-plane augmented reality-enhanced” head-up display that shows things like speed, direction, and navigation prompts.

Neither pricing nor specs for the production Lyriq have been revealed, but we should know more as we get closer to late 2022, when the car is set to go into production.

How much fuel does a Formula 1 car use? F1, NASCAR & more compared

Wed Aug 12 , 2020
Motorsport would be nothing without the fuel that powers it, but how much a car can use, and when, makes up a big part of each series’ regulations. Traditionally, high fuel consumption was deemed a good thing, proving that a car was being driven at the limit and that view […] 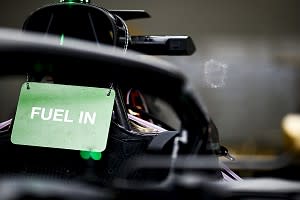