Skip to content
A worker walks through the vehicles stored in the lots at the Cox Automotive Inc. Manheim Pittsburgh vehicle auctioning location in Cranberry Township, Pa. (AP Photo/Keith Srakocic)

NAPERVILLE, Ill. — At the height of the coronavirus pandemic in mid-April, used-car dealer Alex Tovstanovsky had vehicles jammed six rows deep on his lot in the western Chicago suburb of Naperville.

But the seeming oversupply was not a mistake.

Despite plummeting sales at his store, Prestige Motor Works, Tovstanovsky was betting on a recovery, buying dozens of cars in early April as auction prices for used vehicles dropped.

That bet is now paying off. Tovstanovsky can offer cars cheaper than local competitors, and his sales jumped 38% in May versus May 2019.

“This is an election year, and I felt the Trump administration and the Republicans in Congress would do whatever it took to keep the economy strong,” Tovstanovsky said.

Rising demand has now pushed used-vehicle prices about 20% higher than when Tovstanovsky made his bet.

As America shut down in March to combat the spread of COVID-19 and its economy tanked, U.S. new-vehicle sales plummeted. Sales were down around 30% in May, an improvement from a 47% drop in April.

But used-vehicle sales have rebounded faster. 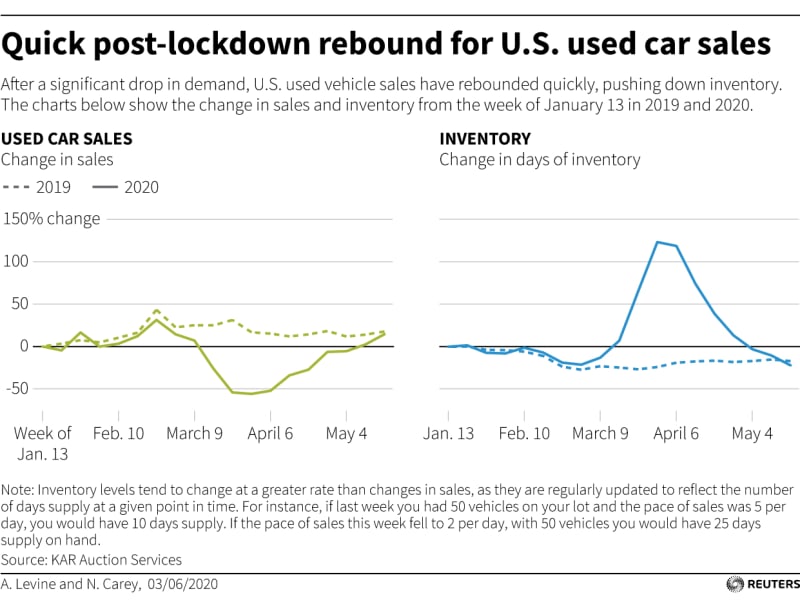 Dealers are now competing to buy vehicles, even as the U.S. economic outlook remains uncertain.

“We actually have an issue now, which is that we don’t have enough inventory,” said George Arison, co-CEO of online used-car seller Shift. Shift’s sales rebounded to pre-COVID-19 levels by late April.

Americans typically become more frugal and favor used cars in uncertain times. Cars remain a vital commodity in a country where getting to work without a vehicle is impossible in all but a few large cities. 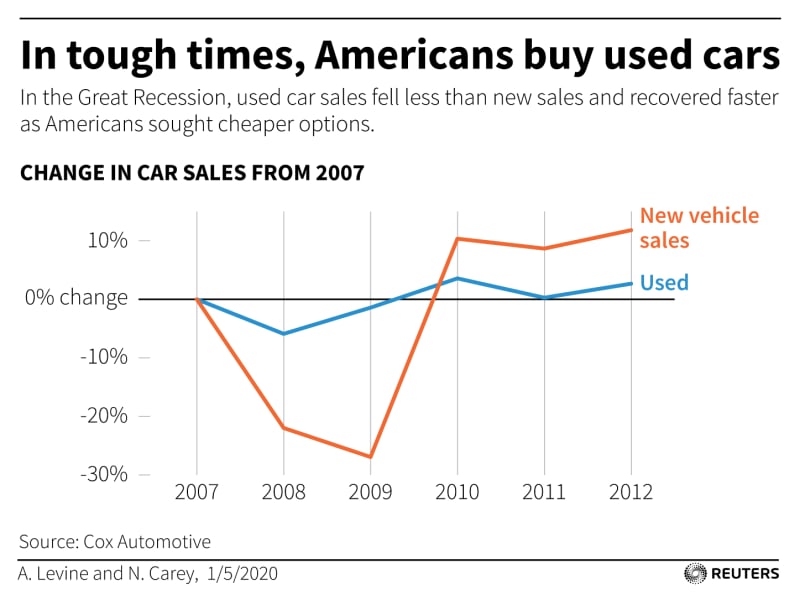 Rising used-car sales increase competition for automakers who must sell new cars to offset cash burned during a two-month shutdown for the North American auto industry.

According to Cox Automotive, new-vehicle sales for the week ending May 28 were down 28%, but sales of used vehicles were up 6%.

According to Cox unit Manheim, wholesale used-vehicle prices rose 5.74% in the first half of May from the previous month.

Carmax Inc, the No. 1 used-car dealer, has already called back about two-thirds of the 15,5000 employees it furloughed in April.

“We expect to come out of this in a position to take advantage of the resiliency of the used-car industry,” said chief marketing officer Jim Lyski.

While dealers say access to financing is plentiful, Wells Fargo & Co said this week it will stop offering loans to most independent dealers due to economic uncertainty.

“I’ve seen a lot of downpayments this month of exactly $1,200,” said Scott Allen, owner of Auto Land in Fort Worth, Texas, which sells older used vehicles. After being closed for nearly a month from March 23, Allen’s sales in May were up 55% over his average for that month.

The U.S. used-vehicle market has distinct layers. At the top, in terms of price, are vehicles returned after short-term leases that look nearly new. Those are a concern for the industry.

More than 4 million off-lease vehicles are due to return to the market this year, at a rate of around 340,000 per month.

Automakers and their finance arms are trying to slow the pace at which those vehicles hit auctions to avoid flooding the market.

KAR Auction Services Inc has bought 200 acres (0.81 square kilometer) of land and is seeking another 100 acres to store cars for major customers.

Tom Kontos, chief economist at KAR, which alongside Manheim dominates the U.S. used-car auction market, calls these vehicles “melting ice cubes.” They lose value every day, and cannot be held back for long.

Franchise new-car dealers are driving demand for used cars to fill lots short of inventory because the coronavirus shut down assembly plants.

Ten of the top 15 models sold at U.S. franchise dealers were used rather than new between May 22 and May 28, according to automotive marketing platform PureCars.

Mon Jun 8 , 2020
By Nick Carey NAPERVILLE, Ill. (Reuters) – At the height of the coronavirus pandemic in mid-April, used-car dealer Alex Tovstanovsky had vehicles jammed six rows deep on his lot in the western Chicago suburb of Naperville. But the seeming oversupply was not a mistake. Despite plummeting sales at his store, […]