It’s been one month since the Gordon Murray Automotive T.50 was fully revealed. We’re still reeling from learning about how stupendous it is, but Gordon Murray has gone and one upped himself again today. In addition to the road-going T.50, there will also be a track-only T.50s.

The name “T.50s” is only a codename for now. GMA says that a proper full name will arrive when the car is officially unwrapped. Only one photo of the T.50s was shown, and you’re looking at it above. However, we do have plenty of details to share alongside the single photo.

What we’re dealing with is essentially a race car. It’s not legal to drive on any type of road, unless that road happens to be a closed course. The T.50s has more power, weighs less and produces significantly more downforce than the standard T.50. It also costs a great deal more at £3.1 million. Adjusted to U.S. dollars, that’s just over $4.1 million. Alright, yes, the price goes well beyond the realm of silly and ridiculous. But Murray will also argue that nothing else in the world can match it. So, what all do you get for the extra $1.1 million over the standard car?

Somehow, the Cosworth 3.9-liter V12 makes more power. With the new ram-induction, it’s going to make approximately 720 horsepower. No turbos or supercharger necessary. That’s a 66 horsepower increase. Murray says that revised cylinder heads and camshafts, higher compression ratio and a free-flowing exhaust all contributed to the power gains. It doesn’t even attempt to meet emissions or noise regulations anymore, which is a boon for power. In all, over 50 components in the engine have been changed. Murray specifically attributes a 30 horsepower gain to the new roof-mounted ram-air induction system.

Since this model is being built for pure speed on a racetrack, Murray has gone away from a traditional manual transmission. Instead, it uses a bespoke six-speed Xtrac transmission that is shifted via steering wheel-mounted paddles. It has new drive ratios and is optimized for track performance.

A standard T.50 (pictured in the gallery above) is a featherweight at 2,174 pounds, but the T.50s weighs even less at 1,962 pounds. The completely stripped interior contributes to much of the weight savings. Murray has deleted the air conditioning, infotainment, storage compartments, carpets and instrumentation. The seat to the right of the driver has been removed, but the seat on the left was retained for co-drivers or a single passenger for fun. The two seats that remain are both new carbon fiber racing seats fitted with six-point harnesses. A new steering wheel in F1 style (minus the buttons) is swapped in, and there will be a racing display that shows the vitals for racing only. Forged magnesium wheels also contribute to reducing the car’s mass. They’re wrapped with Michelin Cup Sport 2 tires.

Added aero is another big focus with the T.50s. A massive 69-inch delta wing is mounted to the top of the car as the shining crown, a design that was inspired by Murray’s 1983 Brabham BT52 F1 car. Other aerodynamic improvements include a new ground effect underbody airfoil, new front splitter, adjustable diffusers and an aero fin that runs from the top of the roof to the rear lip of the car. Of course, the fan remains, but it now permanently runs at 7,000 rpm. Murray says the car generates 3,306 pounds of downforce. It would be capable of driving upside down at 175 mph or more with this amount of downforce, according to Murray. We’ll just take his word for it. Murray also claims that the car is capable of generating about 2.5G-3.0G under braking. For some perspective, F1 drivers experience about 5G of braking force during races.

The brakes themselves are carbon ceramic units from Brembo. New ducting around each wheel helps them handle the increased heat they’ll be feeling from the extreme braking. Both the engine and transmission oil cooling systems are relocated for better airflow. As for the suspension, GMA re-tuned the dampers, spring and front anti-roll bar for racing. It also rides 1.57 inches lower in front and back. Customers will be allowed to tailor the suspension setup to their liking, though. In fact, everything about the T.50s will be customized to the customer’s desire. Murray really wants owners to track the cars, so the team will be working closely with every owner to set the car up properly for such an event.

“I’d like to organize a series of racing events as part of our Trackspeed package to ensure the T.50s is driven regularly by owners,” Murray says. “There will be nothing like the experience of driving this car. And hearing it … well, that will be something else! I’d like each of the 25 cars to be completely unique from setup to paint finish.”

That’s right, only 25 will be made in T.50s spec. Murray says that half of them are already spoken for, so there isn’t much time left to secure a spot. The GMA team says it will supply a “full range of pit, garage, and support equipment for the T.50s” for those who take it racing. Production for the T.50s will commence after the 100 road-spec T.50 models are built. The current estimate for T.50s production start is the first quarter of 2023.

Motorious Pulls Ahead To Pass Competition In Collector Car Scene

Sun Sep 6 , 2020
⚡️ Read the full article on Motorious Alexa shows that Motorious now outranks many major online publications. A Press Release sent out this morning confirms that Motorious.com pulled ahead of competing websites in popularity as a collector car site, as sourced by Alexa Rank. Alexa is an Amazon-owned system shows […] 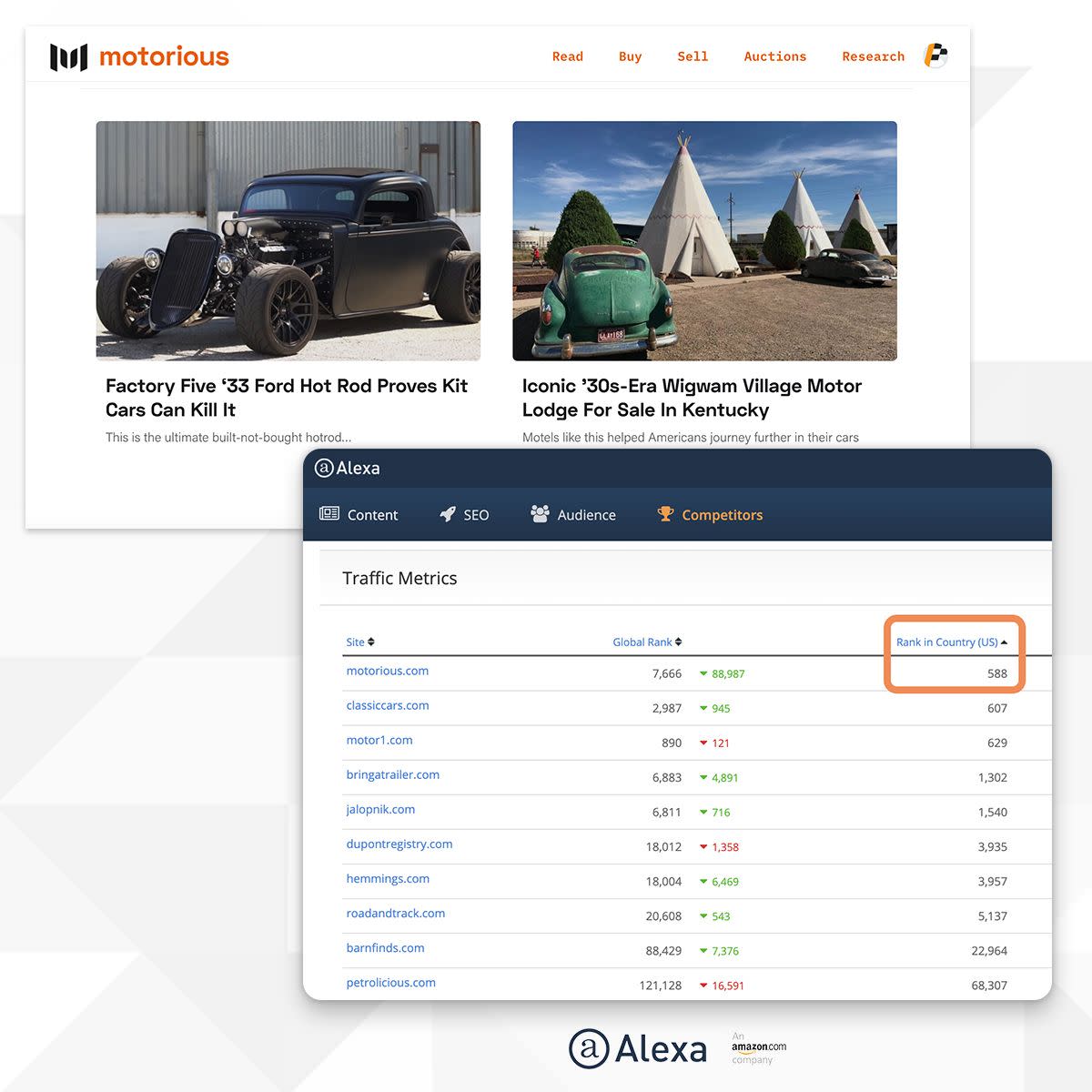